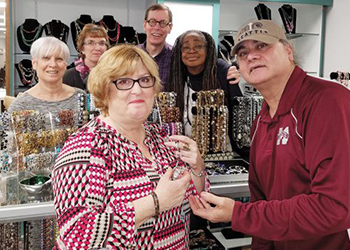 Posted at 14:21h in Newsletter by Adler Aphasia Center
0 Likes

View the original article on JewishStandard.com

It’s truly remarkable how much loyalty, affection, and enthusiasm the Adler Aphasia Center sparks in its volunteers.

As one expression of that commitment, several Teaneck residents — dubbed “Team Teaneck” by Chrysa Golashesky, director of Adler’s Something Special Program — have showcased the center’s jewelry and gift items at several house parties in the community.

“The whole team works and/or volunteers at the center,” Ms. Golashesky said. “Their passion and dedication to advocate for aphasia is reflected in their desire to share our crafters’ talents with friends who don’t have an opportunity to visit the center.”

To date, the team has raised more than $8400. Sales of Something Special items primarily support the center’s scholarship fund, so that everyone with aphasia can participate in Adler’s programs and services, regardless of their ability to pay the tuition fee.

Over the last year, as part of its jewelry line, Adler has added specifically Jewish items — which are selling quite well, and, the team members say, are particularly appropriate for members of their respective synagogue communities. Adler volunteer Linda Kostrinsky began making items of Judaica about nine months ago, and still is making pieces to add to the collection. Then, six months ago, volunteer and couture jewelry instructor Stacy Kaplan took over the collection, adding more sophisticated pieces.

“Linda made some simple bracelets and necklaces with stars, and they seemed pretty popular,” Ms. Kaplan, who first came to Adler as a member, said. “Adler was a life-saver for me,” she added. “Not only did it help my aphasia but it gave me a venue to show my creativity.” That creativity is manifest in the imaginative Jewish pieces she creates, including earrings, necklaces, and bracelets. “We even found beads with a Star of David on them to put on our utensils,” she said. In addition to stars, the jewelry features hamsas and trees of life. Yads — Torah pointers — have been available for several years.

Adler’s Jewish line will be on prominent display at the upcoming Zahal Shalom Spring Boutique, to be held at Teaneck’s Congregation Beth Sholom on March 22. Created in 1993 by a group of supporters in Bergen County, Zahal Shalom brings 10 disabled Israeli war veterans to the community, where they are hosted by local families, for two weeks. Adler participated in an event for the organization once before, and was invited again this year.

Why do the members of Team Teaneck carry their support for Adler outside the walls of the center and into their community?

“Adler is a calling,” team member Tamara Heimlich said; she began volunteering with Adler about 8 years ago. “I saw an article in the Jewish Standard and physically cut it out,” she continued. “I said, when I go back to work, I’m going to go there as a volunteer.” Four years later, she was tapped to be a research associate; she took over as life coach in May.

Still, Ms. Heimlich, like other members of the team, is motivated to do even more. “You do anything you can to support it,” she said. “The members are special people and working with them is a gift. Selling jewelry and supporting them is something I will always do.”

The membership of Team Teaneck has been flexible — former Adler volunteer Lisa Rosenfeld was a founding member but no longer is involved — and several new members, including Renee Denis and Jeanne Freiman, have come on board. But Robin Straus, one of the group’s creators, is as active as ever, despite her full-time job at the center as education and training director.

“I loved Adler, even when I was a volunteer,” Ms. Straus said. She is a member of Teaneck’s Netivot Shalom, as is Elana Samad, who has hosted two of Team Teaneck’s house parties. “Often on Shabbes morning, I see friends [at shul] wearing a piece of our jewelry. And I have given our yad to several bat mitzvah girls at the synagogue.” She expressed her gratitude to the Samad family for opening their home and being “wonderful supporters.”

As Ms. Straus recalls it, the idea for a sale arose in a conversation with Ms. Heimlich and Ms. Rosenfeld. Their plan was to invite only their friends, through email and Facebook, rather than open the house party to the public. The first party was at Ms. Heimlich’s home, some six years ago. Not only was it well attended, but “a woman” — she was a staff member at Yavneh Academy, Ms. Heimlich recalled — “came and was so impressed by the members, the cause, and the merchandise that she decided to purchase hostess gifts for the people hosting out of town guests for her son’s upcoming bar mitzvah. By giving these gifts, she most likely introduced many people to Adler who are not familiar with it.”

“Team Teaneck is just a volunteer thing,” Ms. Straus said. “We enjoy it so much. We have friends who come — and those who come love interacting with the members. They remember them from year to year.

“People should attend our sales because our items are the most meaningful and beautiful gifts to give,” she continued. “You get a beautiful piece of merchandise, beautifully packaged. And with the bio” — each package include a biography of the Adler member who made the item — “it’s so meaningful.

“What a wonderful way to spread the word about aphasia. People thank us for being able to buy the merchandise.”

Something Special will hold an open house at the Adler Aphasia Center from 4 p.m. to 8 p.m. on Wednesday, April 4, to showcase gift and jewelry items made by its members. The Center is at 60 West Hunter Ave. in Maywood.