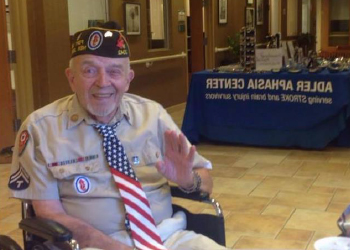 Posted at 17:03h in Member by Adler Aphasia Center
0 Likes

I was living in Essex Connecticut when I got my 1A card, so I was drafted at the age of 19. I first was sent to Fort Devon, which was in Massachusetts. I went through basic training there, and was also trained on a 50-calibre machine gun. Then we trained to shoot targets on tugboat. One thing we learned was to take the 50-calibre machine gun apart when we were blindfolded and then put it together again. As we were training, we went by the Kennedy compound at Hyannis Port. I was wearing winter pants but it was August! We went square dancing but it was very hot. Then we went to Fort Devon again and was transferred to Camp Gordon Johnston in Florida near Carrabelle. It was at Christmas, 1944.

At Camp Gordon Johnston I started engineering training on small boats to get ready for D-Day, although we didn’t know it. Then I went by train to Fort Dix at the end of May, 1945, and then to the Hoboken ferry to New York and then to S.S. Pasteur passenger ship, which had 3000 soldiers on it. It had been a French passenger ship, then an English ship. There was a long line for dinner. As we were being served dinner, a whole dead rat came out of the pot. After that I ate Hershey bars.

We arrived in Liverpool, England on June 5, 1945. The next day, D-Day began. We then got on a cargo train to Bath and saw the Roman pool there, and then arrived in Plymouth, England. About 3 weeks later, I got on a boat to Utah Beach, then on 86-foot tugboats. Liberty boats came and I unloaded them, along with tanks and ammunition at high tide (there was a 24-foot difference between low and high tide, and very tightly packed sand.) We unloaded twice in 24 hours at high tide. I did that for four months. At night, there had to be lights so we could see. The unloading first took place on barges, and then a crane was used to unload everything onto trucks. The trucks, which were the Red Ball Express, went close to the front without lights. They used tiny red lights to see.

Then the Allies captured Cherbourg and opened the port again, so there was no need to use the tugboats any more. I transferred to a French port Arromanches at Omaha Beach, boarded a tiny tugboat MTL (motor towed launch) and unloaded materials. After a while it was no longer used because many more French ports opened for the war effort. From August to November there was not much work because the ships didn’t come to that port any more.

Then I went to Rouen; near Christmas I got a train to Ghent, Belgium. In Ghent, we got on tugboats that navigated along canals to Ghent port. Then we anchored and unloaded the cargo: tanks, motors, ammunition, and then Belgian barges would take them to areas near the Front. At Christmas time, I finally got a girlfriend and together we went to an underground carousel. The sergeant asked to borrow money, but I had used it for ice cream and cognac, lunch in a big house with music with a violin. In the springtime, Belgium has a five day holiday. My girlfriend and I took a small boat (MTL #412) to Ostend. I almost married her, but the captain sent me back to America. I was temporarily in Camp Twenty Grand, along Seine River, was very cold. There were eight men in a tent with a coal fire all night. Then I got in a big truck to the Port of Caen. The ship we got in unloaded 3000 German soldiers back from the United States and 5000 American soldiers got on board to go back to the US.