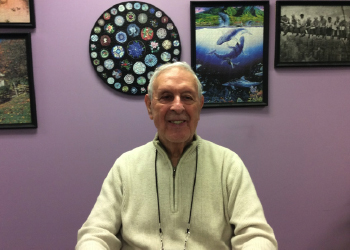 Posted at 20:28h in Member by Adler Aphasia Center
0 Likes

On September 10, 2001, my wife & I flew to the lovely island of Bermuda for a planned vacation. The next day we were taking a “glass bottom” boat trip and went to the tourist office to await the boat. While we were there, we heard some news coming from a radio but could not understand what was being broadcast. A worker told us that planes had crashed into the Twin Towers in NY and the towers fell down.

We were so upset and worried as our son worked in the city and on occasion, our son-in-law would go into the city on business. When we returned to the hotel, we tried calling home and our daughter’s house, but were not able to get a connection. Finally, later in the day our daughter was able to reach us at the hotel. She said everyone was fine. What a relief!!

After we got home, our son gave us some details of leaving his office and trying to get home to NJ. He managed to hop a bus to the ferry and as the ferry was leaving the port, he saw the second tower go down!! The majority of riders went to the side of ferry to watch the tower and the ferry captain was screaming on the PA system for some people to return to the other side of the boat or it would capsize.

We understand that many planes as possible were re-routed to Bermuda. All Bermudians were very kind to us and kept expressing their sympathy.

We left Bermuda for home eight days later and upon landing in Newark witnessed the smoke still burning from the towers. This image was very difficult and sad to watch and to this day is burned into our memory. We didn’t know any details of 9/11 for months. Anyone not living on the east coast, cannot imagine the tragedy of 9/11. Some day we would like to revisit Bermuda without any thoughts of 9/11.