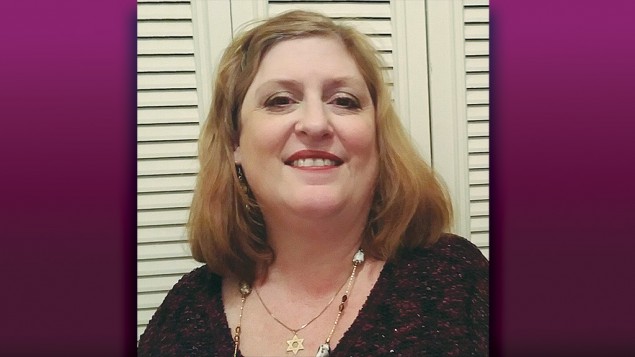 16 Mar From member to volunteer: Adler Aphasia Center inspires local woman to give back

Posted at 21:32h in Newsletter by Adler Aphasia Center
0 Likes

In 2010, while she was an elementary school teacher at Gibbs, a public school in New Milford, Stacy Kaplan of Fair Lawn, then 47, got married at a ceremony conducted by Rabbi Francine Roston, the leader of Congregation Beth Tikvah there. (The synagogue, also known as the New Milford Jewish Center, closed its doors in 2013, merging with the Jewish Community Center of Paramus. Rabbi Roston went on to head a congregation in South Orange before she and her family moved to Whitefish, Montana.)

Around that time, “the rabbi ran into my mother and they discussed books,” Ms. Kaplan said. “She suggested that my mother read ‘My Stroke of Insight,’ written by a neurologist who had a stroke and knew what she was going through.” Soon afterward, Ms. Kaplan had a stroke. “The rabbi visited me and said she’d never recommend that book again,” Ms. Kaplan, now a volunteer at the Adler Aphasia Center, said.

The book, however, did prove helpful. “In the hospital, my mother read it out loud,” she said. “It helped me with my recovery.”

Ms. Kaplan’s stroke happened while she was driving down Route 4. She noticed that her vision was getting cloudy in one eye. “I went to the ER,” she said. “My carotid artery had ripped.” Ms. Kaplan, the mother of four teenagers — two hers, two her husband’s — at the time of her stroke, spent a week and a half at Valley Hospital and then a month at the Kessler Institute in South Orange. She emerged with aphasia, a communication disorder that affects a person’s ability to speak.

“The doctor told me I had aphasia,” she said. “It was the first time I ever heard the word. I was paralyzed when I first got the stroke and the doctor said I wouldn’t be able to walk without aid and wouldn’t have the use of my left arm.” Undaunted, and determined to regain her skills — she can now jog “a little” — she did not accept her doctor’s diagnosis.

Hearing about the Adler Aphasia Center in Maywood from her friend Roz Goodman — Roz and her husband, Larry, are Jewish activists, and their son Larry is a former president of the Jewish Federation of Northern New Jersey — she made a decision that “changed my life.”

Joining the center “gave me my life back,” Ms. Kaplan said. “Working on jewelry there was better than any physical therapy for my fine motor skills.” But even more, Ms. Kaplan, who had continued attending Jewish communal events before joining Adler but admits to feeling somewhat awkward, “now had an opportunity to talk to people and not worry about what they would think of my talking. I walked in and felt like I was home. It was warm and welcoming.”

At first, she avoided jewelry making, she said. “I didn’t want to do jewelry. I did it before the stroke and didn’t think I could do it. The second semester, Eunice” — then jewelry director — “kept trying to get me to do it and said she would help me.”

In the meantime, Ms. Kaplan tried to go back to work “but was not successful because of aphasia. My spelling was bad. I had to figure out what to do.” In the end, she had to retire. But with all this time on her hands, she still wanted to do something useful.

“I chose to work at Adler,” she said, becoming the first member to work as a volunteer. “I work mostly in the store, teaching couture jewelry. I’ve always been good with my hands and have a good eye, which helps.” At first, “I put my hand on the table and however little I could use it, I did. I saw that I could make nice pieces. I guess I was a bit surprised.”

She also decided that she had to relearn how to read. “I used to read quickly,” she said. “When I first came home [after recovery], I had all this free time but I couldn’t read. I taught myself to read using a first-grade phonics book. It gave me such insight into how children learn. I was really determined. I don’t like to sit still. Now I can read again, and faster, but for me it feels like I’m reading slowly.”

In May, Ms. Kaplan is going to Israel, where she will visit the Adler facility at the Hadassah Academic College in Jerusalem. She is inspired by Jewish values, she said. “I learned about giving back, about being kind.” She also recalls the determination of her grandfather, “who fled Russia because of persecution and always said he planned to go back to get the money he left.” (That dream has remained unfulfilled.)

But for the granddaughter, “Adler has brought my life back to me. I go places, have friends, conversations. And the groups are purposeful, not just exercises.” She did make inquiries at local Jewish institutions after her stoke “but couldn’t find anything that fit because I didn’t talk much.” It would be helpful if synagogues and other Jewish organizations could “just be aware of what is out there for people to go to,” she said.

For now, Adler is filling Ms. Kaplan’s needs, and her desire to give back is being put to good use. She is actively involved in planning the center’s April 5 open house, which will showcase the jewelry created by members. Proceeds are used to fund scholarships for attendees. “I’ve made some of those pieces, necklaces and earrings,” Ms. Kaplan said. “I’ll also help with the selling.”

Some of that selling takes place at synagogues, she added, and she singled out Lisa Jacobson, whose husband, Paul, is the rabbi of Temple Avodat Shalom in River Edge, as being particularly helpful in that effort. “She’s absolutely great and has been very supportive to the center,” Ms. Kaplan said; Rabbi Jacobson has sponsored both home and synagogue events., she added “We had a sale at Avodat Shalom in the ballroom and it felt so peaceful,” she said. “There was a real spirit there.”

What: The Adler Aphasia Center will hold its Spring Boutique and Open House, showcasing handcrafted jewelry and gifts created by Something Special, the center’s vocational artisan program

Where: At the Adler Aphasia Center, 60 West Hunter Avenue, Maywood

RSVP: (201) 368-8585. Center staff will provide tours on request, as well as information about the facility. Sales primarily support the center’s scholarship fund, so that anyone with aphasia can participate in its programs and services, regardless of ability to pay. Something Special has provided scholarships to more than 100 people with aphasia since the program began.